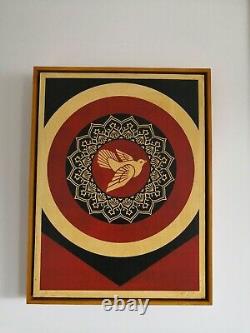 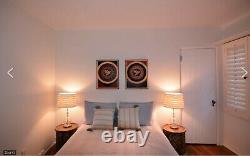 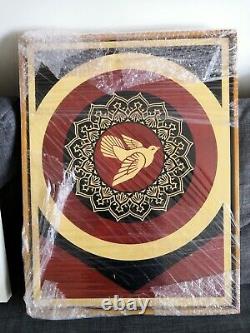 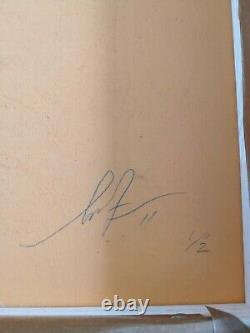 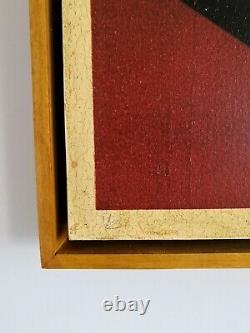 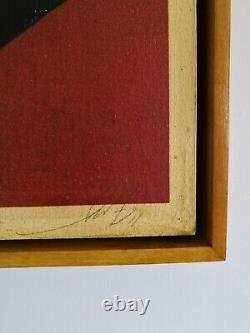 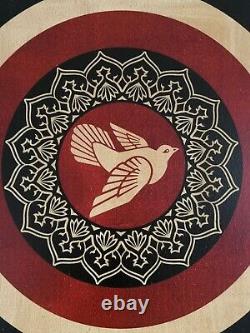 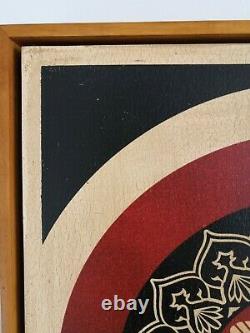 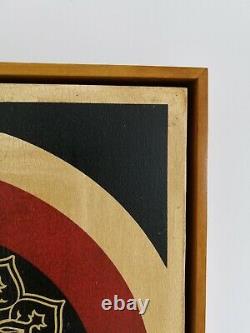 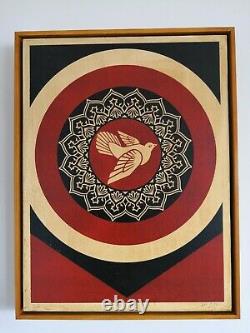 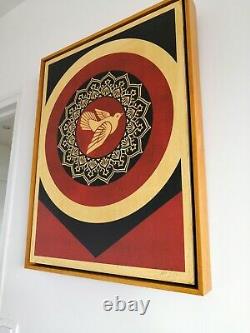 Peace Dove Red / Rise from the ashes. A rare and exclusif Wood Screenprint of Obey aka Shepard Fairey From 2011. Signed, dated and numbered on the Backside and Frontside.

All unique, this is a silkscreen made by Shepard Fairey himself on this wood pannel. This work was part of Shepard Fairey's private collection located in her bedroom. Do not hesitate to consult all the photos to see the details of this amazing and rare artwork.

The framing was done by a professional and allows to highlight the work of the artist! Media: Screeprint on wood panel. Edition: 1/2 Numbered and signed by the artist (on both sides of the work). Frank Shepard Fairey is a very famous graphic artist, muralist, and overall artist.

He was born on February 15, 1970 in Charleston, South Carolina in the United States. In 1988, the artist graduated from Idyllwild Arts Academy in Palm Springs, California. He earned his Bachelor of Fine Arts from the Rhode Island School of Design in Providence, Rhode Island in 1992. As a young adult, Shepard Fairey became very interested in art.

He soon began to use his drawings in T-shirts and skateboards. He was a skateboard-obsessed art student. While in school, Shepard Fairey held a part-time job in a skateboarding shop. Soon after, he hit the skateboard community hard by pasting homemade stickers all over the place. It was then that he realized his desire and interest in the street art culture and graffiti movement. Another strong influence was his love for punk music, which he demonstrated stencils. One of the first images he ever used was that of Andre the Giant. Shepard Fairey found this image in a newspaper ad and he chose to introduce it to the streets. Obey comes from the same artistic movement as Banksy, Futura2000, Rammellzee, Space Invader, Kaws, Andy Warhol, Keith Haring, Yves Klein, Takashi Murakami, Obey, Shepard Fairey (Obey), Ben Eine, Pure Evil, Ludo, Rero, C215, Jef Aérosol, JR, Swoon, Orlinksi, Speedy Graphito, Vhils, Ming, Ferrari, Rolex, Piguet, Ernest Pignon Ernest, Picasso, Atari, Panier, Hirst, Koons, Vu, D Face, Ron, Murakami, Shrigley, Polock, Koons, Dubuffet, Matisse, Delaunay, Buffet, Kapoor, Wesselmann, Dine, Hockney, Kapoor, et Os Gemeos.

Shepard Fairey is one of the most influential street artists of our time. Shepard Faireys work has been used in screen-prints, stencils, stickers, masking film illustrations, wheat paste, collages, sculptures, posters, paintings, and murals. Shepard Fairey enjoys working with the colors black, white, and red. Fairey has constantly shifted between the realms of fine art, commercial art, street art, and even political art.

Shepard Faireys work combines elements of graffiti, pop art, business art, and Marxist theory. His work has been seen in galleries around the world and even museums. Not only that, but is often recognized in graphic designing and signature apparel. One of his most famous works includes his portrait of Barack Obama.

This item is in the category "Art\Art Prints". The seller is "mw_gallery" and is located in Maisons Alfort. This item can be shipped worldwide.