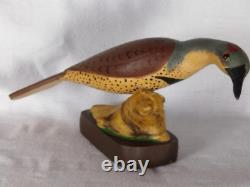 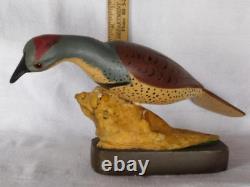 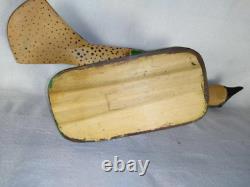 Vintage signed by Folk Artist Richard Elzey from Cambridge MD. Richard Elzey, He was born in Cambridge on June 8, 1924 and was a son of the late Milton and Bessie Wroten Elzey. He attended schools in Cambridge. Richard had served in the US Army from April of 1943 until he received his Honorable Discharge in November of 1946.

He was a member of the 17th Airborne Division, 193rd Gilder Infantry Regiment. His first glider landing was in Wessells, Germany on Jan. 7, 1945, 21 days into the Battle of the Bulge. Richard was in two major battles with the 17th Airborne. Casualties in 193rd and the 194th were so great that the 195th was formed by combining the two regiments.

Richard lost his left leg while crossing a river near Munich, Germany. He was awarded the Good Conduct Medal, European-African-Middle Eastern Campaign Medal, American Campaign Medal and the World War II Victory Medal. Richard was a member of Dorchester Post 91 American Legion and Choptank Memorial Post 7460 VFW. 5, 1947 he was married to the former Beulah Mae Bradford. She passed away on Sept.

25, 2007 after 60 years of marriage. Richard had a lifelong love of crabbing and fishing. Losing his leg did not stop him from working for many years at Haddaway's Shell Station in Cambridge.

For the past 20 years Richard was a very active decoy carver and had made well over 1,500 decoys. He was well known for his folk art carvings of animals and miniature people. Anyone who drove down Stone Boundary Road during the summer will always remember Richard working in his garden, and if you stopped to chat, as many did, the subjects were varied and interesting.

Richard often said he wanted to be remembered as a nice man. This item is in the category "Art\Paintings". The seller is "pmalito" and is located in this country: US. This item can be shipped to United States.