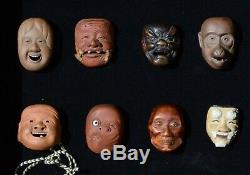 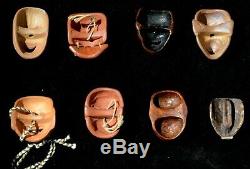 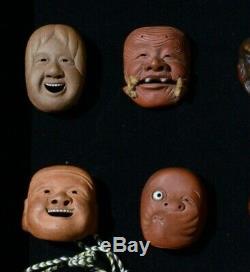 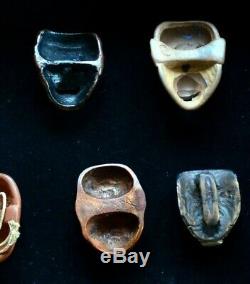 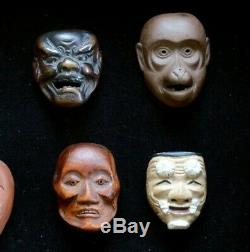 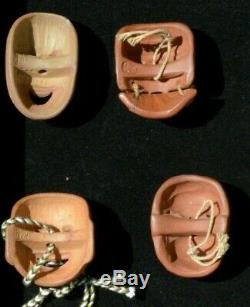 Lot of 8 netsuke Noah artist Kabuki masks. First Row from the Left to Right. (1) Pottery ceramic mask netsuke of. Kygen masks are correlated to Noh masks, and there is great discussion about which influenced which. Kygen is usually played in the intervals of Noh plays. Unlike Noh, Kygen is less formal, with a lighter religious tone, and more related to comedy, the human nature and the search for meaning in daily life action. It is widely said that Kygen works as a scape valve for social and hierarchical tensions, as its main purpose is to make fun of important characters depicted in the Noh plays and in society in general. Usobuki (or Usofuki) is the smallest of the characters representing the meaninglessness of the human condition in its impotent apex. Its eyes look surprised, but it is unable to scream or roar; it can only whistle, discretely, cowardly, inconsequentially.

Hence, Usofuki also being used as the representation of insects and small animals. Hence, again, the origins of its own name: "uso" meaning lie, and "fuki" meaning to blow, to whistle. SEKISEN on the back - the artist is listed in NETSUKE MASKS by Raymond Bushell, p. 177, signatures 264 and 265. (2) Pottery ceramic mask netsuke of.

It is also called Sanbas because it appears in the third piece of a programme, and "the third" is translated to "Sanban" in Japanese. It has been used in celebrations since the dawning of Noh as sarugaku, and I would say it is the first mask created in Japan. Although it has similar appearance to Hakushiki-j, including smiling eyes, swirling wrinkles on the cheeks, and hinged lower jaw, the mask itself is a bit smaller and painted black. It is the best choice for using in prayers for the country and the world at peace, and bountiful harvests. (3) Bronze mask netsuke of. A mask representing a bad demon whose defeat ends in celebration. Muscles tense with rage, eyebrows furrowed to the extent that the upper half of the metallic gold eyeballs are hidden, a nose that juts out with its large nostrils, and blunt, large upper and lower teeth emphasize the scowl on the shikami mask, from which its gets its current name meaning awful, scowling face. The black painted hair of the eyebrows, mustaches, beard, and head all look as if they are standing up, tousled from anger. The mask is painted a dark skin color. (4) Pottery ceramic mask netsuke of Saru. Monkey (Kyogin) signed by Sekiho. The word Kyogen means a play that is a farce, or a joke. In the 15th century, the Noh play Nohgaku was called Sarugaku or the Monkey play. Kyogen was originally a humorous performance of mimicking art, but in the Edo dynasty (1603 - 1867), the Tokugawa shogun specified this as Shikiraku, which means the ceremony was for the use of the samurai. Then it became more refined and a dignified form of art. These masks are realistic representations of the the monkey. Second row from the left to right. (1) Pottery ceramic mask netsuke of Daikoku.

Daikoku, in Japanese mythology, one of the Shichi-fuku-jin (Seven Gods of Luck); the god of wealth and guardian of farmers. He is depicted in legend and art as dark-skinned, stout, carrying a wish-granting mallet in his right hand, a bag of precious things slung over his back, and sitting on two rice bags. Rats are sometimes shown nibbling at the rice, further emphasizing the theme of prosperity. Usobuki kygen signed by Sekisen.

During that time the district lords dedicated the Kagura play to prove their hearts were submissive. When the lords expressed their greetings to the Yamato Emperor, it became the source of the Okina play. The Okina mask is the oldest of the Noh masks.

The rounded eyebrow and the separated chin makes it different from the other Noh masks. Enmekaja followed during the Kamakura Dynasty and these masks were used to portray God. They were used to pray for peace, safety, and a good harvest. The item "Lot of 8 netsuke Noah artist Kabuki masks from Meiji, signed collection" is in sale since Monday, March 23, 2020. This item is in the category "Antiques\Asian Antiques\Japan\Netsuke".

The seller is "kipi2000" and is located in Holy Land. This item can be shipped worldwide.