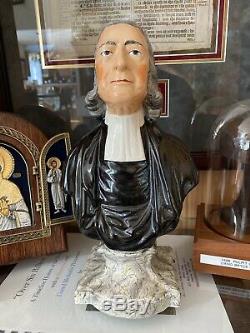 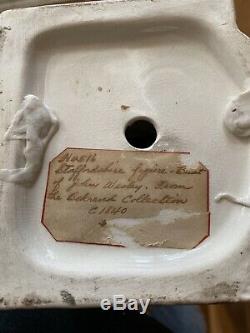 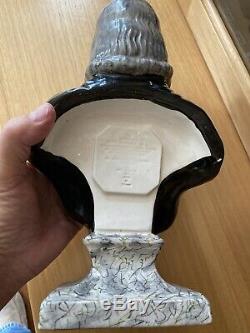 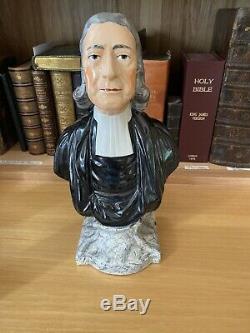 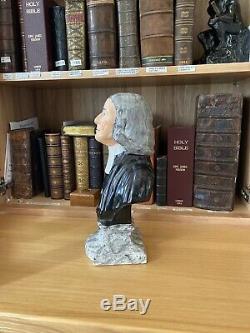 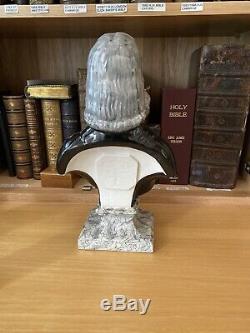 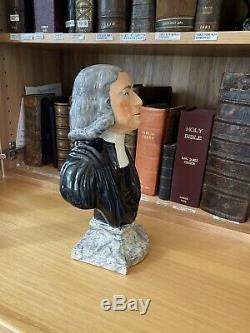 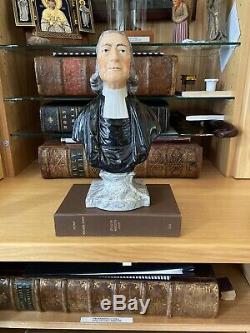 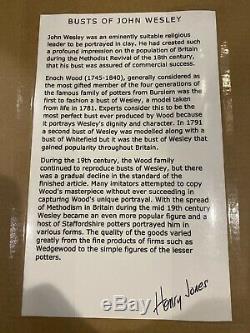 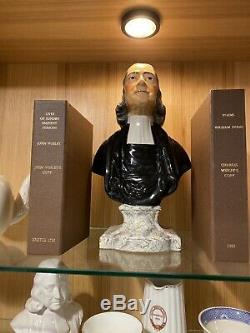 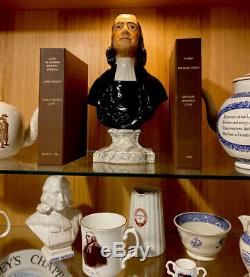 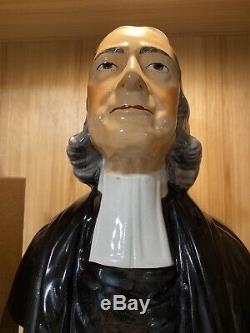 John Wesley Staffordshire Bust, circa 1840. Wesley, father of Methodism was depicted on this bust, the original taken from life. Wesley died in 1791 and by that time many Methodist Chapels had a copy of this Staffordshire bust of Wesley. Based on the coloring and base it is estimated that this bust was produced in England around 1840. The information below is from my Wesley presentation. "John Wesley and the 18th Century World". John Wesley was an eminently suitable religious leader to be portrayed in clay. He had created such a profound impression on the population of Britain during the Methodist Revival of the 18th century, that his bust was assured of commercial success. Experts consider this to be the most perfect bust ever produced by Wood because it portrays Wesley's dignity and character. In 1791 a second bust of Wesley was modeled along with a bust of Whitefield but it was the bust of Wesley that gained popularity throughout Britain. During the 19th century, the Wood family continued to reproduce busts of Wesley, but there was a gradual decline in the standard of the finished article.

Many imitators attempted to copy Wood's masterpiece without ever succeeding in capturing Wood's unique portrayal. With the spread of Methodism in Britain during the mid 19th century Wesley became an even more popular figure and a host of Staffordshire potters portrayed him in various forms.

The quality of the goods varied greatly from the fine products of firms such as Wedgewood to the simple figures of the lesser potters. From the collection of Henry Jones 1992.

Enoch Wood bust of Wesley is from the authors collection. THE REVEREND JOHN WESLEY M. FELLOW OF LINCOLN COLLEGE, OXFORD AND FOUNDER OF METHODISM. HE SAT FOR THIS BUST TO MR ENOCH WOOD SCULPTOR BURSLEM 1781 AND DIED IN 1791 AGED 88 YEARS. Do all the good you can.

By all the means you can. In all the ways you can.

John Wesley 1703 - 1791. 1791 February 24, 1791 John Wesley writes his final letter. After a lifetime of speaking out against slavery he wrote the following in a letter to William Wilberforce. Unless God has raised you up for this very thing, you will be worn out by the opposition of men and devils. But if God be for you, who can be against you?

Are all of them stronger than God? O be not weary of well-doing! Go on, in the name of God and in the power of His might, till even American slavery (the vilest that ever saw the sun) shall vanish away before it.

Reading this morning a tract wrote by a poor African, I was particularly struck by the circumstance, that a man who has a black skin being wronged or outraged by a white man, can have no redress; it being a LAW in all of our Colonies that the OATH of a black man against a white goes for nothing. That He who has guided you from youth up may continue to strengthen you in this and all things is the prayer of, dear sir. 1791 March 2, John Wesley dies. He had traveled over 250,000 miles by horseback and preached 42,000 sermons. He published 233 books earning over 30,000 pounds in royalties which he primarily used for charity.

At his death the Methodist movement had over 135,000 members and 541 itinerant preachers. He died poor, leaving behind a good library of books, a well worn clergymans gown and the Methodist Church. The best of all is God is with us.

The last words of John Wesley. The item "John Wesley Staffordshire Bust circa 1840 from original by Enoch Wood" is in sale since Sunday, May 10, 2020.

This item is in the category "Antiques\Decorative Arts\Ceramics & Porcelain\Figurines". The seller is "henryjones293" and is located in Sequim, Washington. This item can be shipped to United States.