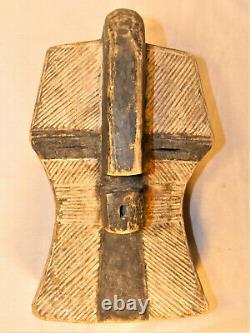 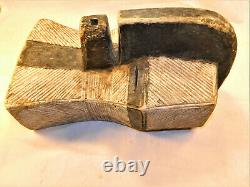 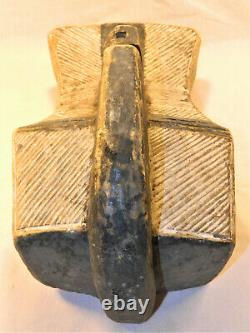 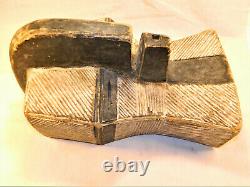 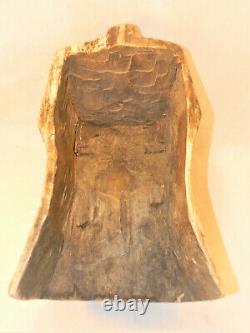 VINTAGE AFRICAN TRIBAL MASK SONGYE Authentic From The Congo. Masks all over the world and in Africa in particular were used in religion-magio-social rituals. Rituals were common and collective acts, performed on a sequestered and consecrated site and aimed at the invocation of preternatural entities. But by extension rituals were pragmatic instruments, composed of gestures, words, and objects, in this case, masks, in which unseen spirit-powers postulated as sacred were cast into the visible world, often - as in Africa - by means of masks. Being the abodes of these powers, the masks dominated the rituals.

Preternatural, life giving forces were invoked to further the increase of human beings, animals, and the earth, and also to guide humans through his life crises in a dynamic affirmation of the union, or the oneness, of the external world and man. Rituals were the consecrations of life as continuation of the confirmation of archaic precedents established by one's ancestors to provide a guideline for all human actions.

In the Songye language, a mask is a kifwebe : this name has been given to masks representing spirits and characterized by striations. Depending on the region, it may be dark with white strips, or the reverse. The kifwebe masks embodied supernatural forces.

The kifwebe society used them to ward off disaster or any threat. The masks, supplemented by a woven costume and along beard of raffia bast, dance at various ceremonies. They are worn by men who act as police at the behest of a ruler, or to intimidate the enemy. It can be either masculine, if carved with a central crest, or feminine if displaying a plain coiffure.

The size of the crest determines the magic power of the mask. Mask, colors, and costume all have symbolic meaning. The dancer who wears the male mask will display aggressive and uncontrolled behavior with the aim of encouraging social conformity, whereas the dancer who wears the female mask display more gentle and controlled movements and is assumed to be associated with reproduction ceremonies. The use of white on the mask symbolizes positive concepts such as purity and peace, the moon and light. Red is associated with blood and fire, courage and fortitude, but also with danger and evil. Female masks essentially reflect positive forces and appear principally in dances held at night, such as during lunar ceremonies and at the investiture or death of a ruler. The mask had also the capacity to heal by means of the supernatural force it was supposed to incorporate. The ritual of exorcism consisted of holding the sick mans mask while a magician acted as if he were casting it into the fire. Kifwebe mask representations also appear on other objects belonging to the kifwebe society grooved shields, for example, are adorned with a central mask. Buffalo masks with a brown patina that have no stripes were used in hunting rituals. This mask is a wonderful example of Songye craftsmanship displaying traditional colors and motifs. Carved from a single piece of wood. A fantastic addition to any collection. The item "BEAUTIFUL VINTAGE AFRICAN SONGYE TRIBAL MASK KIFWEBE Authentic From The Congo" is in sale since Monday, August 26, 2019. This item is in the category "Antiques\Ethnographic\African\Other African Antiques". The seller is "countiben" and is located in Marietta, Pennsylvania.