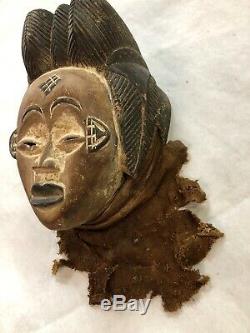 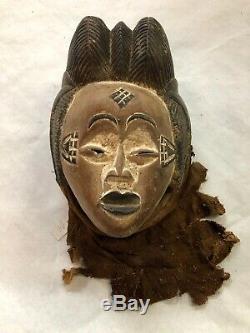 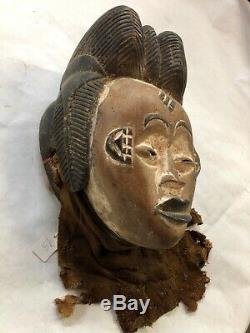 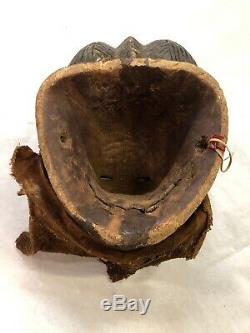 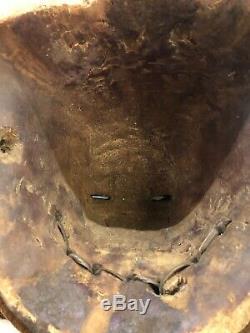 Today you have a unique opportunity to own a part of an impressive collection of original African objects which is now being liquidated due to several unforeseen business circumstances. Please check out all of our auctions for other interesting pieces from this and other sources!

Dimensions: 15 tall (excluding textile) x 11 wide x 7 deep. Nice relief of hand-carved marks inside mask. Pronounced hair and dark lips typical of the Punu style. Its provenance is as follows: this piece was originally acquired by an avid collector of ethnographic antiquities in the 1970s, and was held as part of a large private collection in the Southeast for decades, unseen by the public eye.

In 2005, that collection appraised as a whole for more than two million dollars, and has since been divided as part of an estate distribution. This piece remained in the original collector's estate until circa 2011. Since that time, it was acquired by and has been held as part of the Tibiwinston, Ltd. Feel free to message us to learn more about the provenance of this piece. This Punu mask is a fine example, the pronounced lips and hairstyle clearly revealing its origin tribe. White Punu masks are very well known and easily identifiable by their physical features.

A typical Punu mask will be white with an Oriental expression. Many will have nine triangular scarification marks on either the forehead or temples or both. A black and finely scored coiffure is always present. Protruding puckered lips and a pointed chin will also be prevalent.

The dancers of these masks would be raised up on stilts and would hold the mask between their teeth with the aid of a small wooden stick. White masks would participate in many festivities that were important to the community. It is not known whether these masks are feminine or masculine, since they convey traits of both. The Punu reside on the left bank of the Upper Ngoume River and belong to a group of tribes known as Shira which were originally part of the Luango kingdom of Angola with the Eshira, the Lumbo, the Vili, the Galoa and the Vungu people, the Punu migrated northwards during the 18th century and settled where they are now. They live in independent villages divided into clans and families and social cohesion is ensured by a society known as Moukouji, whose primary role is to subjugate harmful forest spirits.

During ceremonies related to the society, small statues and masks appear which are often covered in white pigments alluding to their anti-witchcraft functions. Punu masks are thought to represent ancestors faces. They are worn during funerals and by a Moukouji initiate who stands on stilts.