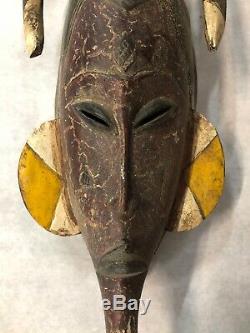 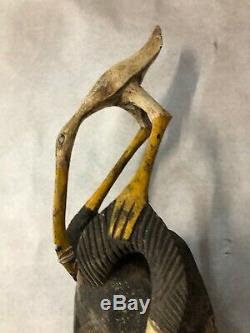 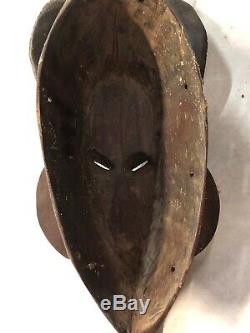 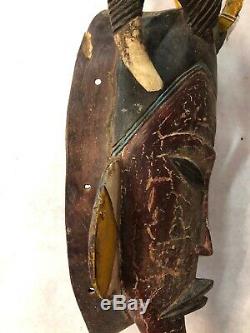 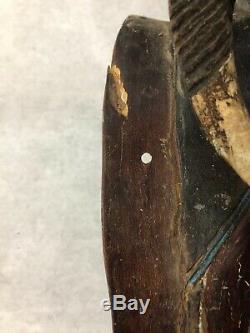 Today you have a unique opportunity to own a part of an impressive collection of original African objects which is now being liquidated due to several unforeseen business circumstances. Please check out all of our auctions for other interesting pieces from this and other sources! Dimensions: 29 tall x 5" deep x 7" wide. See chip at side which does not affect the stability of the piece. Its provenance is as follows: this piece was originally acquired by an avid collector of ethnographic antiquities in the 1970s, and was held as part of a large private collection in the Southeast for decades, unseen by the public eye. In 2005, that collection appraised as a whole for more than two million dollars, and has since been divided as part of an estate distribution. This piece remained in the original collector's estate until circa 2011. Since that time, it was acquired by and has been held as part of the Tibiwinston, Ltd. Between the Baule and the Yaure to the west, the Malinke to the north and the Bete and We to the south, the Guro people live surrounded by savannah and forest. They migrated from the north during the 16th century and number about 200,000. Originally they were called Kweni, but they were violently colonized between 1906 and 1912 and were given the Baule name Guro by the invading French colonials. Guro villages have rounded houses in the northern area and rectangular houses in the southern region.

Village life is regulated by a council of elders, representing each main family, and by secret societies. The Guro farm predominantly cotton, rice, coffee and cocoa - the men clear the fields and the women plant. Three different regional styles of mask can be distinguished.

In the western Guro area, face masks are carved with extremely pointed chins, protruding mouths, long linear noses, bulging slanted eyes and a high-domed forehead which is sometimes adorned with scarifications. These masks have apotropaic functions and are worn by an adjudicator when guilty individuals are punished. The southern style is influenced by the neighbouring Bete tribe.

Their masks can be distinguished by their human physiognomy, raised scarification in the middle of the high forehead, a triangular nose and pierced eyes surrounded by incised scarification. Another type of mask found in this region has a domed forehead, an upturned nose, slanted eyes and a pointed chin. Dye masks, either in the shape of a mans face or an antelope or elephants head, tend to be worn at the funerals of important chiefs and can only be viewed by men. In the northern area, four major types of ceremonial mask are carved.

The Gye mask represents a stylized antelope and is worn during memorial festivals. Three other masks appear at the same time during entertainment ceremonies and are owned by ab appointed family. The Zamble face mask represents yet another stylized antelope; the Gu face mask resembles an elegant womans face with forehead scarifications and an elaborate coiffure incorporating some amulet symbols; and the Zauli face mask takes the form of a stylized antelope head with tubular eyes, a pair of horns and a beak-like square mouth. The item "Authentic Bird Guro Gu Bete Gye African Art Mask From Private Collection" is in sale since Saturday, January 4, 2020.