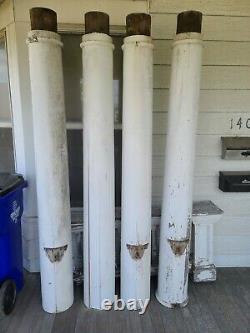 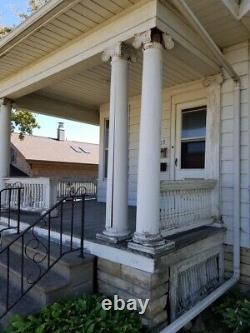 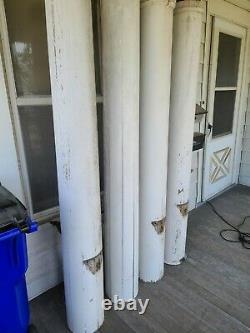 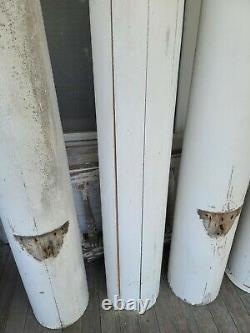 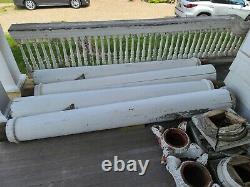 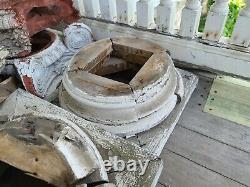 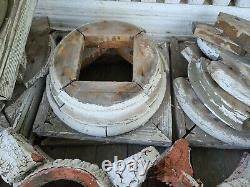 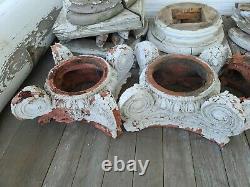 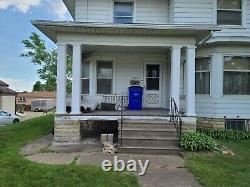 Elegant, vintage, round, Victorian porch columns salvaged from Cedar Rapids, Iowa. The house they came off of was built in 1912.

The house was hit with the Derecho storm of 2020. The storm tried to lift the roof of the porch like an airplane wing. This took all the weight off these load bearing columns which allowed the wind to blow the bases of the columns about 4 inches to the East. When the storm was over and the weight of the porch roof was back on the columns, they continued to support the roof.

I jacked up the roof to move the columns back to a more level position but saw that the bases the columns rest on were deteriorated and not structurally sound. I decided to replace these columns with new aluminum ones. You can see in the second picture what the columns looked like on the porch.

They had a brick-like decorative cap that fit around the top of each column. These caps are deteriorated and very fragile.

Two of them are mostly complete, and two were broken pretty badly in the storm. The columns are made of rounded hardwood boards that fit together kind of like a barrel, and are painted white. The columns are tapered and are wider at the bottom than at the top. The columns are sturdy, and in good shape considering they are 109 years old.

The bases are made up of a series of square and round pieces that added another 6 of height. The columns were 93 tall when in place on the porch. The 6th and 7th picture are of the most complete column base. The pieces could be used as a templet to re-create the bases.

My plan is to carefully box the caps and bases, and band the columns and boxes to a large pallet. Please contact me with any questions. The last picture is the house with the new aluminum columns. This item is in the category "Antiques\Architectural & Garden\Columns & Posts". The seller is "glassrooster" and is located in this country: US.