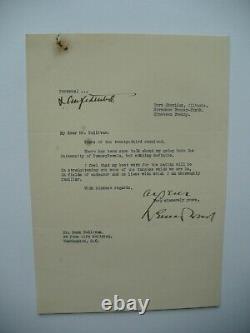 Letter dated November 26, 1920 by Leonard Wood who served as a Major General in the United States Army. The letter indicates his potential future involvement with the University of Pennsylvania. After he retired from the United States Army in 1921 he was chosen to serve as Provost of the University of Pennsylvania but ended up going to and serving as Governor General of the Philippines instead. Mark Sullivan was considered one of the most widely respected journalists of his day corresponding with Presidents Theodore Roosevelt, William Taft, Woodrow Wilson, Warren Harding, Calvin Coolidge and Herbert Hoover.

Sullivan was a confidant to Theodore Roosevelt as well as a good friend and confidant to Herbert Hoover. In addition to Presidents, Sullivan corresponded with many notable politicians, businessmen and literary figures of the day including Arthur Conan Doyle who he was good friends with as well as Henry Ford, Thomas Edison, Orville Wright and many other prominent and influential people from the 1890's to mid-1900's. Sullivan correspondence can be found archived in the manuscript division of the Library of Congress and in the Herbert Hoover Institution Archives. The letter which is signed in ink by Leonard Wood is typed on plain stationery with hand-written notations in ink. There are typical fold creases and a couple of small spots of discoloration with one from a circular paper clip.

ACCURACY OF DESCRIPTION, CONDITION AND IMAGES: The item is described as accurately as possible along with any condition issues. The images show the quality of the item as accurately as possible although because the images were taken using a camera with flash the resulting images may show bright spots or a shine, shadows or color tone variations from flash use and reflection. Computer screens can also vary in how they show images of items so there may possibly be some tonal variation seen depending on the computer screen from which the images are viewed. Will be determined by where it will be sent. This item is in the category "Collectibles\Autographs\Historical".

The seller is "norwich222" and is located in this country: US. This item can be shipped worldwide.