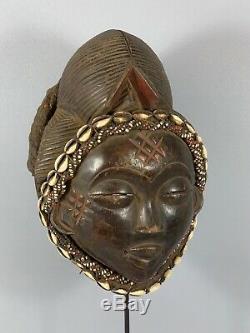 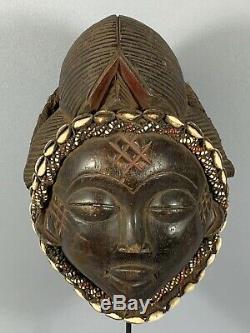 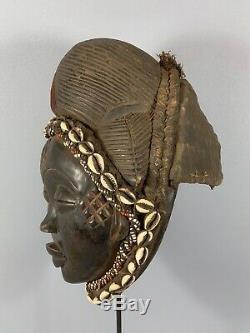 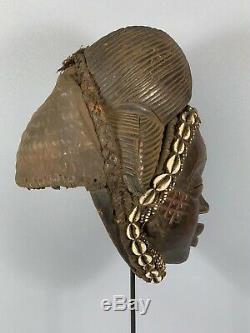 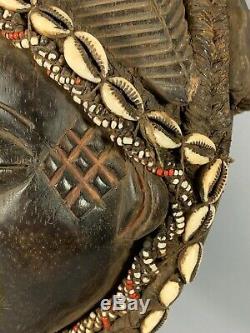 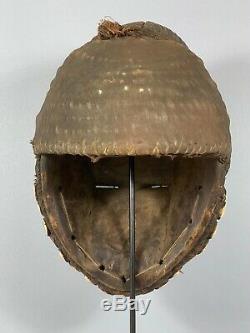 Tribal used african Old black mask from the Punu, Gabon. This finely crafted object depicts female face. Hand carved from a single piece of colorful painted wood, with scar tattoos and artful hairdo. Punu reside on the left bank of the Upper Ngoume River (Gabon) and belong to the group of tribes known as Shira which were originally part of the Luango kingdom of Angola. With the Eshira, the Lumbo, the Vili, the Galoa, and the Vungu people, the Punu migrated northwards during the 18th century and settled in the area where they continue to inhabit to this day. They live in independent villages divided into clans and families, and social cohesion is ensured by a society known as. Its primary role is to regulate community life with regards to social and judicial matters, and mainly it applies itself to the neutralization of evil forces. To this end, officiates of moukoudji utilize a cult kit that includes statuettes, human relics and masks. The stand is NOT included. No hassles, no questions asked.

We are usually able to respond within 24 hours. The item "181028 Tribal used Old African female mask from the Punu with Cap Gabon" is in sale since Thursday, March 28, 2019. This item is in the category "Antiques\Ethnographic\African\Masks". The seller is "africa-gallery" and is located in Hengelo OV.